Just in time for the Solstice, WMG Publishing  has published  my Solstice story, “A Close Shave”. An unfortunate typo in my last name (Hutchinson instead of HUTCHESON) notwithstanding, this one of my favorite stories that I’ve ever written and I am proud to be included in this Holiday Spectacular, which is a kind of advent calendar of excellent fiction by some of the best writers working today. The story will also appear in Crooked Little Christmas, published next year.

I wrote that story almost a year ago. I’m going to tell a story about my life then. You can skip it if you don’t want to hear a sad story.

So, as of today, I have to take the story down. I know a lot of you couldn’t manage downloading either version for one reason or another and I am sorry about that. But, “A Close Shave” will be included in Crooked Little Christmas, coming out next year. I’ll make sure everyone knows it, you can bet on that.

You might want to read it, though, to understand what most every grown kid goes through at some point in their adult life.

My mom had lived independently since my dad died in in early 2018. I live behind them on the next block and our yards connected by a gate. I went up every day to help them. I started going twice a day (except Saturdays when my little sister took care of church duties) to help her out with various things after my dad and brother died.

Everything was great until October 2021. She fell in the kitchen, sitting down hard on the floor. She didn’t break anything, but she was more concussed than anyone realized. After another fall less than 24 hours later, she ended up a “rehab facility” where they basically tried to get her to move about 20 minutes a day and then let her languish in a wheelchair or bed without any thought given to her neck, which had to be supported just so, after a surgery for decaying spine bones.

I can’t fault the people there too much. They are saints doing a horrible job. Most of the aides are immigrants from South America or Africa and do their jobs well. But there are so many people in need and it’s a thankless job for the most part. She just needed more than they could give. The social worker and the doctor decided she couldn’t go home unattended. My little sister and I agreed. She was in a fog. Not really like herself at all.

The plan had always been to use her savings, then the sale of her house to pay for an assisted living facility. We found a really great one, with a generous studio corner apartment featuring lots of windows. Her cat, Buddy, could go with her.  We made the arrangements and moved her a day after her benefits at the rehab facility ran out.

She just could never get into it. She faded into this little baby bird life style, wanting everyone to do everything for her. My sister and I tag-teamed, visiting every day. She wanted to go home and understood what needed to happen in order for her to go home, but she was just didn’t do anything. She was listed as non-compliant by everyone who came into contact with her. She developed a bed sore on her back, between her hips and wouldn’t do anything the nurse asked her to do to help it get better.

A talk with her Primary Physician around her wound care got her into the hospital to have their wound care specialists look into it and give her a comprehensive review. They determined what we all knew: she was not a good fit for assisted living and we moved her to a skilled nursing facility close to my home just before Christmas last year. She was not much happier. She had had to put her own mother in a nursing home in the Seventies, and I think she hated the idea of going to one herself and being a burden to her children. We were there twice a day, tag teaming for meals to get her to eat.  We had a weird family Christmas at my house without her and went over to en masse to visit her Christmas morning. She was floaty. Happy to see people, but mostly sleeping. She wasn’t praying or reading or knitting, which she used to do every day. She had become a pale imitation of herself, and it was heartbreaking to watch, knowing the wound on her back was just getting bigger and bigger despite the care and the special bed and moving her every couple of hours.

Enter the invite to write the story at the beginning of 2022. We had a week to write it and turn it in on the following Sunday.  The plot and Paolo himself leaped into my mind immediately, fully-fleshed, snarky, and absolutely competent in his laser-focus on retrieving Grant, his lover, so they could enact their Solstice Ritual, the same one I enact every year.

So, I had the story written by Friday. I was missing some details and setting around the ending, and planned to work on it on when I got off work, then let it sit so I could look at it, if not cold, then lukewarm, before I sent it off. The phone rang midmorning. The patient rep was always funny when she called. She would say her name and then say, “This is not an emergency.”  Except this time, she said, “It is an emergency. She has blood in her urine. She’s going to the emergency room.”

I called my little sister and we met at the hospital. The doctor said she was in bad shape and that if we did nothing, she would pass in a day or so.” As the health designate, I wet to talk to her. I laid it out pragmatically for her because she has always been pragmatic. I said that she was in pretty bad shape and the doctors could solve the problem, but she wouldn’t get back to where she had been.  She took it in calmly. Or, I said, we could do nothing and she could go meet Dad and their son. She chose to go meet them.

I relayed the info and we called our two daughters to come, and my older sister to give her the news. Everyone got time with her, except my older sister, who lives out of state. Afterward, we stood around taking comfort and hugging, then suddenly weeping. My little sister was distressed, saying she wanted Mom to get fluids at least, which she did get. It turned out to be a mistake.

We spent the rest of Friday night, Saturday, and big chunk of Sunday dealing with the prospects of my mom dying, moving her back to the skilled nursing facility, making arrangements for hospice level care, and sitting vigil. I got back into my office chair after dinner and did what I could before I had to go to bed so I could get up to go to work in the morning while my sister sat with her, after which I would relieve her.  I told myself that I could say that I had written a story and turned it in on time, and left it at that.

My mom didn’t pass in a day or so. The fluids stabilized her and she hung on another two and a half agonizing months, going to her Maker four days after her 91st birthday. Going through this with her–the tag-teaming with my sister to make sure that we were there for lunch and dinner, coaxing her to eat bits of this, morsels of that, enticing her with cream pie and creamy fruit (the yogurt she always swore she didn’t like, but said was good) has made me face my own life and the realization that I have more years behind me than ahead of me, and that the decisions I have made this year have created the choices that I have looking into the future.

Kris Rusch asked people to explain why they chose the holidays they wrote about.  I said, “I love the solstice. The ancient knowledge that this is the shortest day of the year and darkness holds sway for most of it, that life is balanced on whether or not there’s enough food or resources to get to spring when bounty would arise from the earth again is a deep-rooted fear in people whether they realize it consciously or not.

“The ritual of turning off all the lights and sitting in the dark with my fears and failures on the shortest day of the year is very powerful for me. Then lighting a single candle to welcome the light back into the world and my life and expressing my hopes for the coming year is a renewal I look forward to amidst the hustle and stress at the end of the year.”

The solstice is important to me because I have always clawed and fought for the life I’ve lived. I’ve lived close to the bone and made hard choices for myself and my daughter. The ritual that Paolo and Grant do is my ritual, similar to many others out there. It’s good to take the time to reflect, and I’ll be thinking very hard about the decisions I have made, the choices they have given me, and how I will strive to create the best life I can out of them.

This year is especially harsh, given the powerful Arctic blast bearing down on huge swaths of America tonight.

I hope that you all survive, relatively unscathed, and that you can let go of your regrets and bring  the light of hope into your life to beat back the darkness. 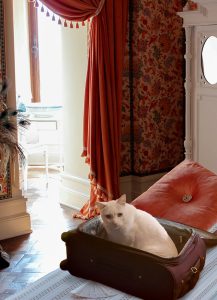 “Sign up to get your passport to far-away lands full of hope and wonder.”